The Aretas Aerial team knew they were involved in a dynamic and exciting industry by helping fire departments get the latest UAV technologies they need. Recently a story in the Parksville Qualicum Beach News helps illustrate just how useful our remotely piloted aircrafts are for emergency service agencies. Here is the article posted with permission from pqbnews.com

While there have been incidents of drone aircraft harassing people or wildlife and even hampering forest firefighters, they can be a powerful tool.

Aretas Aerial recently moved to a little rural Dashwood shop from northern B.C. and started producing UAVs (unmanned aerial vehicles) with advanced sensors and cameras for all kinds of applications. 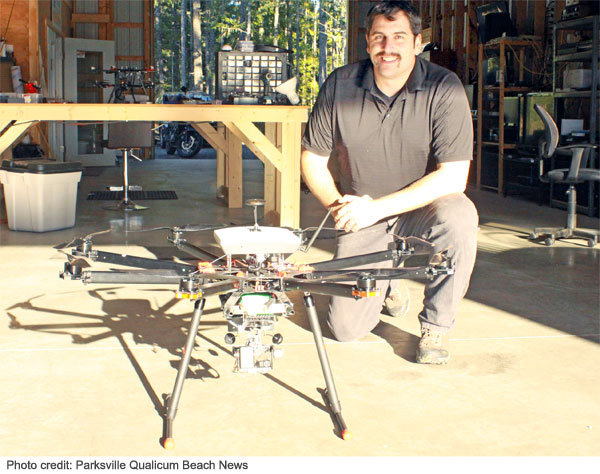 Aretas’ business development officer Greg Duerksen, a firefighter, is most excited about the valuable help the drones can offer fire departments, like that in Mackenzie, in northern B.C., which bought the first one.

During its first flight in Mackenzie, the UAV flew over a hog fuel (wood chip) pile of concern, sending live, high-definition (HD) video and thermal imagery to the base station where fire department and B.C. Wildfire Service representatives could see stress cracks, vents and hot spots they couldn’t have seen any other way.

“Already in its first flight, the UAV has proven to be an invaluable piece of equipment,” said Deputy Chief Keinan Carty in a news release.

Chief Jamie Guise agreed. “We embrace the use of UAV’s as a tool in our fire rescue service. We have hand-held FLIR (forward looking infrared) cameras, dash cams and automated pumping systems in our engines. UAV’s equipped with HD and FLIR cameras allow us to perform our duties safely and efficiently.”

Parent company Aretas Sensor Networks started five and a half years ago developing high-tech sensors for things like carbon dioxide or radiation, and the software to control it remotely, turning on fans, for example, said Duerksen.

The company expanded into drones, “because we really like them, we simply think they’re cool,” he said, adding it was a natural step to find another platform for the advance sensors they were already making.

With about five employees working in Dashwood, and many more in various far-flung locations like Toronto, California and Mexico, they custom build every drone, with the fire service models carrying cameras, GPS and mission planning software that allows them to do things like leave it hovering in a stationary position above a fire.

Dan Pothier, who owns the company with his wife Jessica, said their entire drone package costs about the same $10,000 fire departments have been spending on handheld infrared cameras in recent years.

While the initial model was a quad-rotor design a few times the size of the largest retail models, they can do any configuration and are currently working on an eight motor version that could have a total payload of 50 pounds, though you wouldn’t fly it at its maximum payload, Duerksen said.

Flight times vary considerably depending on payload, weather and the type of flying, but range up to about half an hour, with quick battery changes available.

Pothier suggested possible uses like flying along pipelines “smelling” for leaks, finding people in remote areas and dropping an emergency package while they are being rescued, or monitoring unstable nuclear power plants.

“This is a new industry, so we’re working closely with the industry and Transport Canada to develop it safely and legally,” Pothier said.

“We’re basically selling flying robots,” Duerksen said, admitting the complexities, adding they have their own training programs for customers and work with them on safe use.

While enforcement is sometimes an issue, Duerksen said Transport Canada does have UAV regulations, with different weight categories determining the level of certification required.

—
Note: An earlier version of this article misspelled the last name of Dan Pothier in places which has been corrected.